Hi All,
I am looking at a Qualcast Cordless Trimmer charger For a friend.
After a quick shufti it looks as though the 21V 550 milliamp wall wart has shuffled off its mortal coil.
I didn’t think I had anything around that voltage in my spares bin, but it occurs to me I have some old laptop psus that are rated at 19V (and probably at least an amp)
The hedge trimmer is an 18V model.
Does the team think the laptop PSU will be man enough (but not OTT) for the job?
TIA
Chris

s shuffled off its mortal coil.

n, but it occurs to me I have some old laptop psus that are rated at 19V (a nd probably at least an amp)

If the battery holder has separate charging control, the laptop psu /might/ work, though 19v is likely too low. If no separate charge control it might or might not be a bad idea to try it.
NT

What flavour of batteries does it have? Most lithium ion chargers are constant current/constant voltage (CCCV) - they provide a fixed current as the voltage rises, and at the 'full' voltage (which is quite specific for the chemistry and should not be exceeded) the current drops off and they move into constant voltage mode. Typically power tool batteries will have a BMS PCB inside to handle managing the cells, but they still need the CCCV supply outside.
21V sounds like a pack of 5 lithium ion cells in series (4.2V top of charge voltage). A 19V PSU is likely to over-cook them to begin with (giving them whatever max current it can supply, or alternatively just cut out if it thinks it's running into a short) and then charge them to max 3.8V per cell - not awful, but only say 80% charged.
There are 21V wall-wart chargers on eBay, or Aldi often have chargers for their 20V power tools which should do the job. (a '20V tool' is an '18V tool' in old money, both being a 5S arrangement of lithium ion cells. They'll charge with 21-21.5V). You should watch the current doesn't get too high - if you open up the pack you can find out what cells you have and what their recommended charge current is. It's possible 550mA is Qualcast being cheapskate and they might take more.
Theo

The graph here shows the voltages for reference. For Lithium Cobalt.
https://batteryuniversity.com/learn/article/charging_lithium_ion_batteries
In this example of a battery pack, the config is 2P5S. They don't take the circuit board off, to show the details. But since the individual is doing rebalancing, he would discover the config as part of the process. (This would be classed as another one of those "I don't want to know about it" procedures...)
https://www.ifixit.com/Guide/Cell+Re-balance+of+Ryobi+One++18V+Li-ion+Battery+%28130501002%29/13286
+-batt-+ +-batt-+ +-batt-+ +-batt-+ +-batt-+ --+ +--+ +--+ +--+ +--+ +-- +-batt-+ +-batt-+ +-batt-+ +-batt-+ +-batt-+
rest 3.6V 3.6V 3.6V 3.6V 3.6V charge 4.2V 4.2V 4.2V 4.2V 4.2V (during CV phase, topping from 80% to 100%)
Which gives 18V for the nameplate and 21V during the final phase of charging.
Rather than being a "wall adapter", it suggests the item is a "charger" instead, with charger behaviors. The low charge current and long charge time, are a byproduct of how "sloppy" such a remote charge procedure can afford to be.
A charger starts CC and changes over to CV at the defined "top" voltage.
Whereas a laptop adapter is just a 19V power supply. It's CV (constant voltage) and... it does not shut off. It's not "smart". In a laptop, the smart bit is inside somewhere. A different partitioning of responsibility. The laptop does it this way, because the laptop can run off the adapter, and charge the battery, at the same time. The laptop can also run with the battery removed and just the adapter connected.
*******
https://www.digikey.ca/en/articles/a-designer-guide-fast-lithium-ion-battery-charging
"For these reasons, the charger should control the final voltage to within ±50 mV of 4.1 or 4.2 V and be able to detect when the battery is fully charged. Detection methods include determining when the current drops to 0.1 C during the constant-voltage stage and, in more basic chargers, charging for only a predetermined time and assuming the battery is fully charged."
It really makes you wonder, what's in that wall adapter, and whether it implements a proper smart charge cycle...
And more importantly, if the wall adapter is a smart charger, it means "the normal multimeter tests" are invalid with it. <===== !!! If it does not detect a battery, it could suppress output, and you could be fooled into thinking it was knackered. When it's the *battery* which is fouling up the works.
To test a smart charger, you need a "fake 5 cell battery" to test with, so it sees a decent DC level when connected and it knows a battery is present. It won't attempt to charge a battery which is a dead short. You can't charge Lithium multi-cell from 0 volts. (Only my digital camera single cell packs can be charged from precisely zero volts. I've tested that :-/ It's not allowed on multicell packs, because of "reverse bias" considerations, and how the pack got in such a mess in the first place. Improper maintenance.)
In these cases then, you start by multimetering the *battery*, to see if the battery is causing the adapter to "not charge, desired initial conditions not met".
What would those initial conditions be ?
https://batteryuniversity.com/learn/article/confusion_with_voltages
Nominal Discharged Max charge voltage     Notes (cutoff)
3.6V 2.8–3.0V 4.2V      Classic nominal voltage of cobalt-based Li-ion battery
On a 5 cell pack then, the cutoff occurred at 2.8V * 5 = 14V. If the pack is significantly below 14V, there's a level below which it will not initiate charging. Because, if the pack voltage is low, one of the cells could be a dead short, and could produce metallic Lithium inside the cell (fire risk, thermal runaway, whatever).
All the wall charger has to do, is "sniff" and ask "is 14V present ? No ? I switch off then".
Lithium Cobalt is not a chemistry to be fooling with, because it'll catch fire given a chance. All it takes is slightly badly fabricated cells to enable this. The quality control must be very good, to keep us safe. And using proper smart chargers (complete with "low" cutoff to prevent charging of damaged packs) is all part of the package deal.
If you're the dude in the ifixit article, you *don't* do that on your expensive wooden dining room table. Pick a safe work surface, suited to lithium fire temperatures.
You might catch me attempting to do something like this, but I'd be using a trusty LM317 at a minimum. Running CC. Connect the multimeter with the RS232 output to this computer, and watch in a PuTTY window as the voltage hit 21.0V, race across the room and disconnect it. And that would get me to 80% charged. I could not afford to leave the room, unless the dynamics of the situation showed there was plenty of time before it got to 21.0V. Running in CC mode gets me the completion of Phase1. The LM317 needs 3 volts of headroom, so that means I need a 24V DC supply for the experiment.
(A very simple circuit - my home-made kitchen light uses a cct like this. The input voltage at a minimum, should be 3V higher than the expected/needed max output voltage.) 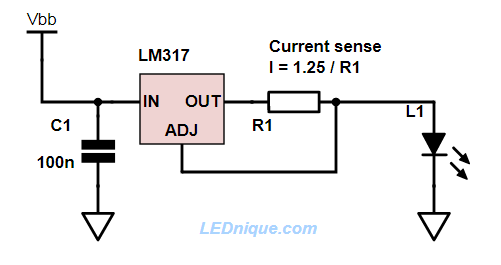 https://lednique.com/wp/wp-content/uploads/2017/11/LM317-constant-current-power-supply.png
If the battery pack reads out "0 volts" right now, a protective link may have opened. If it read "0 volts" because it was shorted or something, then the 19V adapter will just stop its output, because of overcurrent protection (OCP).
Using an LM317 to deliver a constant 0.55 amps, means I'm not honoring the low-voltage cutoff criterion. That's why I can't leave the room, in case I encourage thermal runaway. Using a lower current flow, might reduce the risk a tiny bit. And if I use my LM317, then switch to the "official" charger, I may still have set myself up for a fall. Because the safety criterion must be honored at all times. If you "cheat" and bring up a knackered pack this way, it could still have a thermal runaway event five minutes from now. The official charger would have kept you safe, by not charging when it detects the too-low condition.
Writing articles like this, is like helping people with "home bomb-squad problems". These are not typically situations with "winners".
The purpose of writing a long explanation like this, is precisely to keep people out of trouble. If you don't understand all the limit conditions, you should not be doing this stuff. There's no way to know what could happen to that battery pack next. These can catch fire an hour after you walk away from them. They're fickle.
My hedge trimmer has a cord. Full disclosure.
Paul

Great post. Being rather of the "hack it and see" tendency, it's posts like this that have convinced me not to mess with Lithium Ion. Nice to have the "diagnostic options" so well explained.


While the point about caution is well made, your text is probably off the mark here.
Every power tool lithium battery I've seen - and I've watched quite a number of teardown videos - has a BMS. The BMS does several things:
- cuts off the battery when its voltage sinks below some minimum point (2.5-3V per cell) - cuts off the battery once it's been at full charge (4.2V per cell) sufficiently to prevent overcharging - balances the cells to avoid premature cell death by over/under charging particular cells - cuts off if an overtemperature condition is detected, either through charging or when in use - (sometimes) provides a capacity counter - although crude voltage-based ones aren't uncommon
Now we don't know how smart the OP's battery is, and maybe it doesn't have a BMS in which case I wouldn't want to go near it without a smart charger, but in all likelihood there is a BMS. A BMSed battery pack can charge with two wires - which is what it sounds with the OP's wall wart. It will be a CCCV supply, but that's all there is to it.
A battery that needs an external smart charger with have N+1 wires where there are N cells, plus maybe a few more for temperature sensors. However power tools that have a multi-pronged clip often don't actually expose all the cells this way and have an internal BMS. (the prongs can be for the manufacturer's charger to get temperature/status out of the battery)

I wouldn't want to mess with a battery I haven't taken apart to establish what is going on inside, if it is using a BMS the external power setup is actually quite simple. However using a laptop power brick directly is not a good idea.
Theo

Hmmm.........
Most of these replies came in after the horse had bolted.
The battery is LiOn, the 19V laptop charger was nobbled by its manufacturer to only put out put a decent amount of milliamps if it can “see? ?? a Dell laptop.
Nearest I could get was a wall wart marked 12V which put out 16 and a bit volts both on and off load (battery has just 2 connectors). (The wall wart is a big beast and I suspect has a transformer, rectifier and a smoothing cap inside, the original was tiny).
I charged it for its 4 hours maximum charge, checking regularly that neithe r the wall wart nor battery were getting hot.
At the end of that, the battery output was nearly 17V (up from 15 and a bit .
The user reports that the hedge trimmer is working fine.
I suppose it might shorten the battery life, but hopefully nothing will go bang.