I bought this...
https://www.lowes.com/pd/The-Baltic-Butcher-Block-4-ft-Natural-Straight-Butcher-Block-Birch-Kitchen-Countertop/50437226
..to make this: 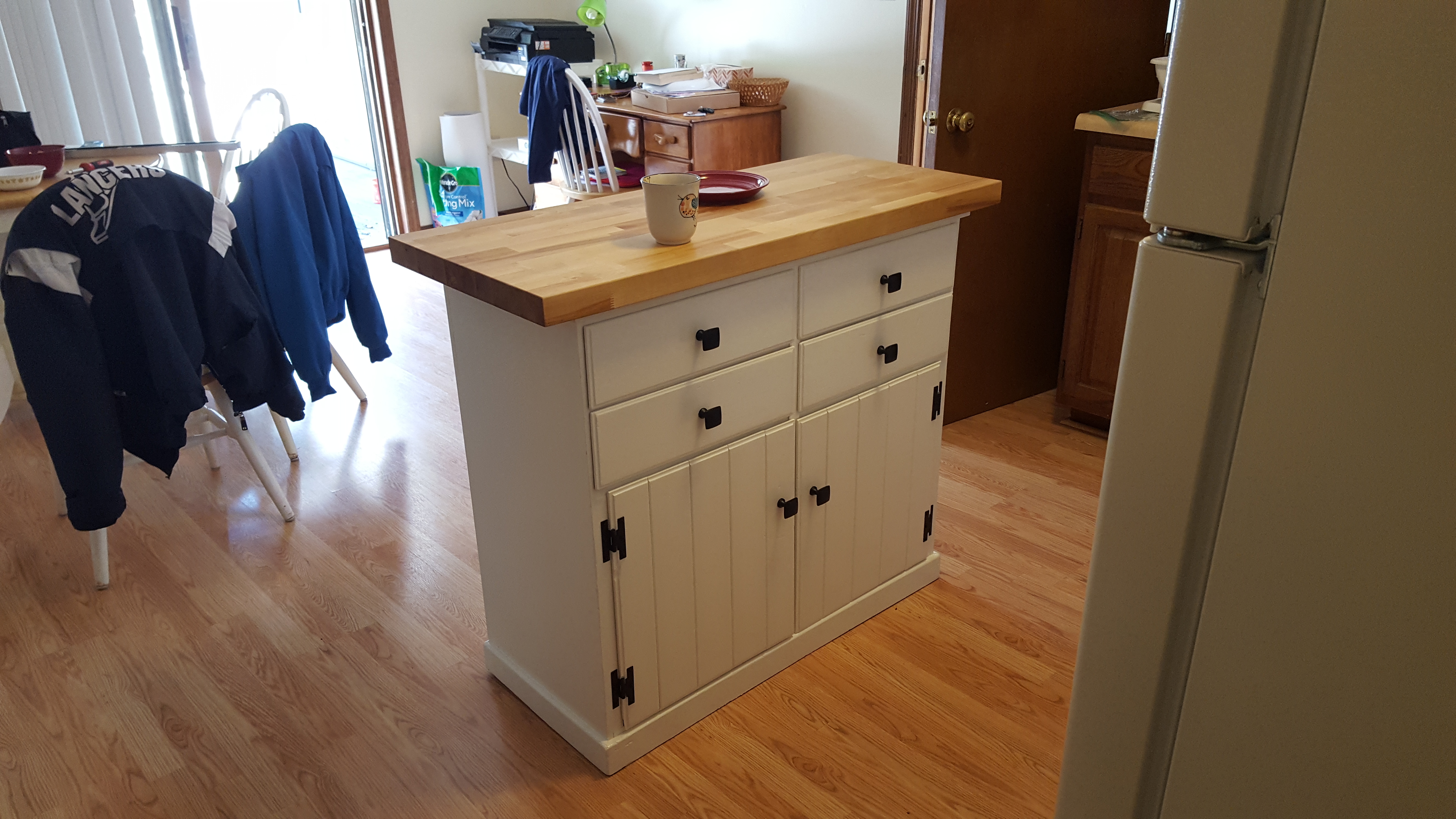 https://i.imgur.com/MWJQG06.jpg
(The base is a repurposed hutch) 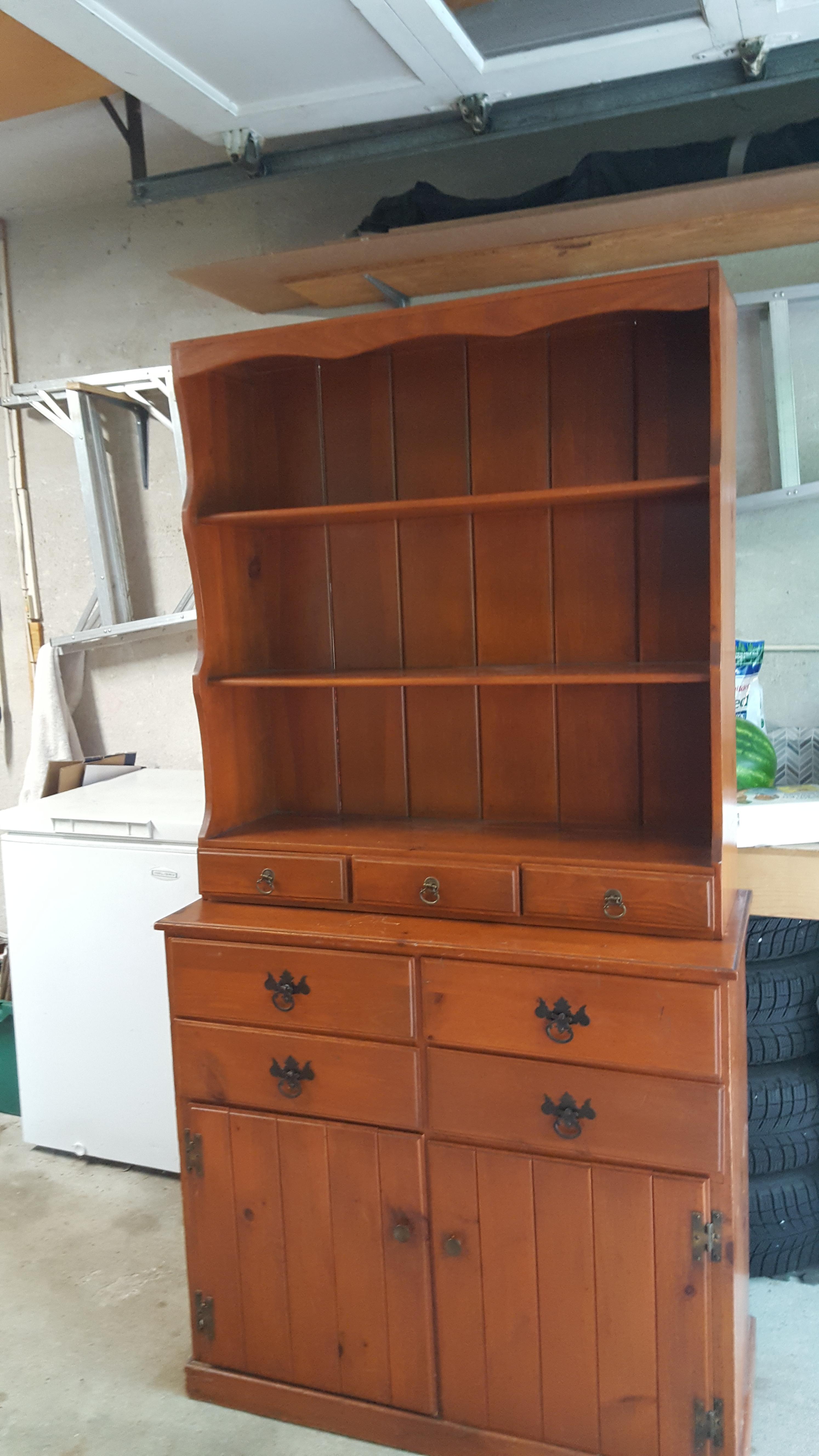 I was replying to the Comet. Since he was was talking about the bench that you linked too, so was I.

d to me to build it as part of the top, but I thought I would check with th e experts.

her block for the inside (5' X 3') and glue (and maybe bolt) the three part s together. I don't see the point of all the screws, but maybe I'm missing something.

Its a nice table with a shelf down below. But its not a woodworking workbe nch. Woodworking workbenches have vises on them to hold the wood so you ca n work with the wood. If you put a Record vise on one corner and a Veritas twin screw vise on the end, then you would have a good workbench.

I need a small workbench in my basement where I can do hand tool stuff in the wintertime.
What do you think about the leg design on this bench? It looks pretty good to me to build it as part of the top, but I thought I would check with the experts.
I think I'll make the two side A-Frames with 2X4s, and then make the butcher block for the inside (5' X 3') and glue (and maybe bolt) the three parts together. I don't see the point of all the screws, but maybe I'm missing something.
Thanks.
Can't believe this is still on Bernie Hunts web site but it is:
http://huntfamily.com/work_bench.htm
This is one I made from a design in FWW magazine. Mine is still in use in my shop and has withstood the test of time an abuse. I added a Lee Valley end vice.
It's simple to make but solid as you'll ever need.
Bob S.

Dead links ?
You are correct. Well they have been there for a number of years and Bernie has certainly made changes. I emailed him.
I only checked that the page was still active before posting but did not click on the links...sorry.
Bob S.

I did a search on Hunt family work bench and came up with this site. It appears to be the same as in the previous post
http://www.huntfamily.com/work_bench.htm

I think the whole bench is rather dumb. I guess if you planned on parking a house, large elephant or full cement truck on the top, it would be OK, but basically, it's WAY over built for a wood shop, and really over built for an assembly table.
Right off, I think a top made of construction grade 2x6's, edge glued is more than enough. I have no clue why anyone other than an elephant mechanic would need a 2x6 face glued top? Don't forget space for a wood vice or two. Might be a good idea to get the vice first, and build the top to suit the vice.
Second, I don't like benches with open middles. Much better to fill it with drawers which give you a place to store stuff, other than on the top. You know, a place for everything and everything in it's place.
Simple 2x4 construction is more than any wood shop should need.
The very first thing I built when I built my shop was the work bench. I made the top from 2x4's ripped into 2x2's because I wanted a butcher block look. I never did that again, I would now simply use 2x6's edge glued. I figured the top could easily be replaced if it got too banged up, being cheap fir and all that. I never replaced or even refinished it. It has almost 50 years of heavy use and abuse, and I wouldn't replace it for anything, it's my shop history and sentimental to me. It does look better as Butcher block, but that's not needed and the way I did it was a LOT of work.
I built all the drawers and made them too small for the case, thinking I didn't want them to swell and jam, because that's what happened to an old bench my Dad had. Damn drawers would stick in the summer. I learned now how to better fit drawers. These have a little sloppy fit. I would not have my main bench w/o drawers. All my tool benches have drawers and or cabinets. Do it that way the first time if you are a wood worker, you'll thank yourself later.
Here are a couple of pictures of my bench after about 40 some years of abuse. I could build it a bit better now, but it is solid as the day I made it, and it taught me a lot about case work.

http://jbstein.com/Flick/bench04.JPG
I'll say this again, you need a place for everything, and everything will get put away, and not get lost. Build drawers, drawers and more drawers. Divide the drawers up so things have their own place in the drawers.
Oh, make the height the same as your TS top so wood can be supported, always a good idea.

--
Jack
Tolerance is the virtue of the man without convictions.

I suppose it depends on what kind of woodworking you do. If you use the be nch as a table to hold up wood you are cutting, gouging, sanding with a pow er tool, then its strength isn't too important. A kitchen table with a vis e bolted to it would be plenty. Sawhorses with a sheet of plywood on top w ould be adequate too. I can imagine an edge glued top of 2x6s would be abo ut like a trampoline if you tried to chop mortises in a table leg. The woo d would bounce a foot into the air via your edge glued 2x6s. Whereas face glued 2x6s would have the mass to absorb mortise chopping.

I hear this comment many times. My table saw top and workbench top are sev eral inches different in height. They are also about 15 feet apart. Table saw in one half of the basement and workbench in the other half. Both are much too heavy to drag close to each other to allow the bench to serve as an outfeed. I suppose people who have moveable and portable benches and sa ws could make them the same height. Those of us with heavy, permanent, siz able benches and table saw setups, don't concern ourselves with having them the same height.