Greetings to All,
I just wanted to take a moment to introduce my company CZ Consulting Services at www.constructionproposals.org. 10% discounts to VOSDSB companies. 10% on additional Options for returning customers.


A dot org domain is supposed to be used for not-for-profit organizations. Since you wouldn't be able to offer discounts if you were operating at the break-even point, you are intending to make money. Which means you are a weasel who cuts corners and misleads people. Pony up the extra money, deep pockets, and make like you're a real company.
R

A dot org domain is supposed to be used for not-for-profit organizations. Since you wouldn't be able to offer discounts if you were operating at the break-even point, you are intending to make money. Which means you are a weasel who cuts corners and misleads people. Pony up the extra money, deep pockets, and make like you're a real company.
R
It doesn't matter... nobody uses ConZultants anymore anyways. And I haven't used or been a VOSDSB company in at least a year anyways...


I looked it up out of curiosity, and while it looks like that was its original intent, profit can use it.


Hence the phrase "supposed to be used for not-for-profit". The company name is something different, so they squat on a non-profit domain. Weasels.
R


It's funny how this whole money/greed thing seems to creep its way into everything and somehow pollute it in the process... Coca Cola called me the other day and asked if I would be interested in creating a viral message/ad on here. Can you believe it?! I told them where to stick it, of course, but then they offered me a fair sum of money...
...So, drink Coke, Rico. Things just somehow go better with it. Your life will change for the better-- you'll see-- if you pop open a tall, cold, refreshing frosty bottle of Coke. *pshshshssssss.s.s s... gloogloogloogloog... Ahhh...*
To change the subject, I was wondering how/how-easy a rounded roof might be to be added to a small timber-frame post-and-beam home. So last night I went looking online for some round-roof post-and-beam structures and found some lovely pics of round-roof barns. I got carried away at looking at a lot of them and sort of forgot my original intent of seeing if I could find the actual structural details. But at least I'm a little bit better-off thanks to Coke.


I had thought about the silo dome, even transforming a whole silo or a timber-frame-post-and-beam structure shaped somewhat like a lighthouse or water-tower frame. The roof I'm thinking of, though, is a partial vault, but might be more trouble than worth. The idea is to allow it to create more space upstairs in an elegant way, directly below it, and at the same time to soften what would otherwise be a harsh steep shed roof-line. I imagine there are tricks that architects employ to do that, and I have a few ideas that might be similar, such as a balcony overhang or a large triangular, circular or funky rotated rectangular window to create a saltbox illusion or punch out a considerable area of "siding" directly below the roof under its apex.

I may have misunderstood what you're trying to do, but wouldn't a mansard or a gambrel roof be more straightforward?


Click to see the full signature.
My idea for the roof-shape (rounded shed roof) would be like half of the roof cut lengthwise (along the rafter ridge beam) of this barn: http://www.ekocite.com/portfolio-pages/romeo_round_roof_barn.html .
I thought that a potentially easy way to do it would be like the old cruck post-and-beam timber-frames where naturally-bent trees or one of their big-enough branches could be used, but placed at each gable end, rather than symmetrically-opposed and attached to each as a bent. So, given a small enough house, the "purlins" might be able to attach to and follow the "funky" roundness of the rafters. (A half-cruck roof?) Metal would cover and conform to the roof's shape. That might be easy enough to do while maybe appearing somewhat unique. What do you think? Any similar existing examples?


What about a "reciprocal roof"? I recently found out about that. It's pretty cool, and there's a big hole in the middle of the roof where you could peer through.


This looks like a double or triple reciprocal roof: http://www.green-heart.org.uk/gallery/Healing%20Shelter/index.html


I'm still wrapping my head around roofs. The pyramid rooftype (hip?) might seem simple while the reciprocal complex, but sometimes some things can be counterintuitive. I was speaking with a friend at a cafe about my new roof-discovery (and book I downloaded on the subject, which at first glance, does seem to have structural calcs) and demonstrated it by taking 3 wooden coffee swizzle-sticks and making a self-supporting triangular reciprocal right on our table.
I presume you saw the Wikip.-entry matchstick examples?: http://en.wikipedia.org/wiki/Reciprocal_roof
From my book, Reciprocal Frame Architecture, by Olga Popovic-Larsen:
"In the case of the Japanese RF structures, the earthquake energy is dissipated by designing timber joints without steel connectors, which allow the structure to move with the earthquake motion. An excellent example of increased structural redundancy is the Seiwa Burnaku Puppet Theatre Exhibition Hall RF structure, where a double RF structure of clockwise and anticlockwise spiralling RF beams is used for the roof. In the case of the progressive collapse of one of the RF structures, the other will take over the redistributed load of the roof. [Reminds me of wheel spokes. This will add to the complexity of the roof, but then they're talking about a larger structure/span/roof too.] Further research needs to be carried out to explore the structural behaviour of RF structures, especially when they are subjected to dynamic loadings. Despite the fact that there is a need for further research, it is clear from the Japanese built examples that progressive collapse is a problem that can be successfully resolved."
Here's something about an very old reciprocal(?) Floor: "Structural analysis of Wallis's structure highlights some interesting subtleties in the way it carries loads. With the simple joints between the beams only transmitting vertical forces, there is a smooth distribution of supporting reactions around the periphery. In contrast, had the beams been rigidly connected to transmit bending and torsion moments as well, the distribution of edge reactions would be quite different, with the largest edge reaction being almost doubled and the edge force for the beam closest to the each corner being inverted. This somewhat counter-intuitive behaviour is related to significant torsion or twisting of the beams, which only occurs with rigid connections at the internal joints. For a given load, Wallis's structure will deflect more than an orthodox rigidly connected array of beams - known as a grillage to modern engineers. However, the smooth distribution of edge reactions would be much easier to provide on the top of brick or stone walls - with advantages for the design of the rest of the structure. Perhaps, his design is cleverer than even Wallis realised, and Wren did miss an opportunity with the roof structure of the Sheldonian Theatre.
In conclusion, modern engineers can greatly admire the work of the famous Oxford mathematician John Wallis. He produced a beautiful and sophisticated structural design, with engineering calculations, approximately 250 years before the University recognised engineering as an academic discipline." -- http://www.soue.org.uk/souenews/issue4/wallis.html

You mean a shed roof? Well that's what all my initial CAD designs have so far. I probably will go with a tried and true shed in the end, but maybe experiment with a reciprocal roof design for a guesthouse, a woodworking shed, or my own still. ;)


http://www.sfu.ca/~rmacinty/rfa/rfa.pdf
I'm just about to head out, but I've uploaded the book (pdf reader needed) for you, if you wish, to peruse before I do. Chapter 5 may have something.
I presume you're still on dialup, but the books' only about 3 pop songs'-worth, so it may not take you more than about 10-15 minutes.
Back later.


Thanks Ken & co - interesting stuff. No problem here with snow load but potentially useful method where wind loads are concerned - eg 61-74 metres/second, high/low/high pressure shift. Of course I'd need an engineer with an enquiring mind and time on his/her hands :-)


Apparently the reciprocal roof is very smooth with load distribution and transference, if I'm reading correctly, which is good if it is also prone by its very design to catastrophic failure (redundancies, such as an in-tandem reverse RF, notwithstanding). :) The term 'catastrophic failure' cracks me up. (Ouch ;)


Have you run across the boveda roof yet? Very cool. 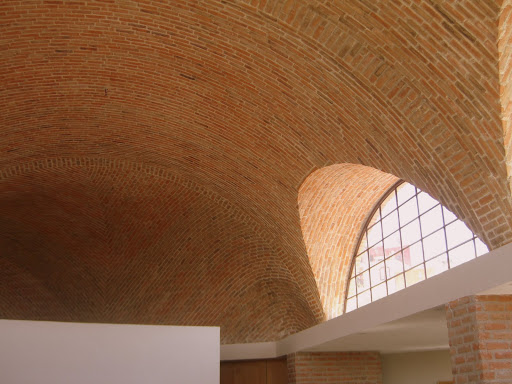 
Yes I think so. I'll look more into it too.


What you'll find is a typical roof rafter/truss system with curved *shims* sistered along the top chord. Unless money is no object. My old 50's era high school had a curved roof gym built with giant laminated curved beams, maybe 24" tall x 8" wide that spanned roughly 80 feet or so. It was built with stolen money so cost wasn't an issue. Its still standing.